Tooth & Nail originally looked more like real beavers, but were quickly changed to match the other characters. Tooth sported blue overalls with a construction hat, and Nail a simple pair of red overalls.

When they were redesigned, both had yellow and green plaid checkered shirts respectively. Both of the beaver brothers now had blue overalls, construction hats, brown work boots, and a slew of construction equipment.

Tooth is a hardworking, organized beaver who wishes to get the job done. His favorite color is Green and his favorite activity is inventing. Tooth's favorite food is Iceberg Wedge. He is always up each day at the crack of dawn.

Nail is considered to be more easy-going which allows him to go with the flow whenever Tooth's rules and schedules begin to take over. He is adventurous and his favorite color is Yellow. His favorite activity is swimming and his favorite food is Logger's Scramble.

Tooth & Nail as statues in 2008, though they look more like regular beavers. 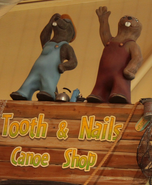