The Northwoods Friends Show is an attraction first introduced at the location in Bloomington, MN and was created by the Los Angeles based Entertainment Design Corporation. It is currently found at all locations built from 2017 to now.

Instead of relying on full-body animatronics like in the past, this show uses a projector-style bust figure of one of the Beaver Brothers, and a large mural that features 2 different animated stories featuring The Great Wolf Kids. The mural also makes the usage of 3D in it's effects.

There are two separate stories which are told. The first story starts out with The Great Wolf Kids wanting to go on an adventure with Wiley leading the group. Sammy, however, gets trapped inside a tree stump. The kids work together to find Sammy who is found at the end of the show.

The second story starts out with The Great Wolf Kids camping outside the Great Wolf Lodge. Brinley, however, can't sleep and decides to go inside the lodge to sleep instead. The rest of the group later finds Brinley in a tent he made inside. They then help him get to sleep through some songs and then the kids finally go to sleep at the end of the show. 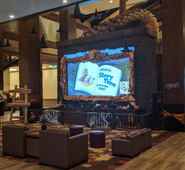 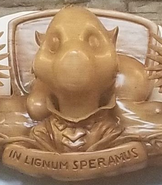 Bust of the Beaver with the projector's animations turned off