The Great Clock Tower Show is an animatronic attraction found at certain older Great Wolf Lodge locations built between 2003-2009, and was added to locations built before then. Locations built after 2009 have a similar attraction called The Forest Friends Show with the exception of Niagara Falls, ON which has an older version of that show. Some existing lodges, such as the Pocono Mountains, PA and Williamsburg, VA locations removed the Clocktower due to the age or maintenance of the animatronics, much to the grief of those who grew up with the show.

The Great Clock Tower Show features animatronic animals and trees as well as a human boy and a Native American woman. As the name states, there is a giant clock which is used to indicate when the show will start. It plays at least four times, usually twice in the morning and twice at evening every day in the Grand Lobby. 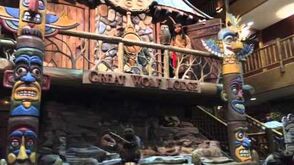 There are several versions of the show, depending on the location. The most common version usually involves a young boy named Simon who ends up getting lost in the forest and needs the help of Yellow Feather and her talking animal friends to reassure him there is nothing to be afraid of. An older version of the show portrays Simon as a young logger, as he and Yellow Feather learn to cooperate and appreciate what nature has to offer. Both shows are also known for the song "Rhythm of Nature".

For the Snowland celebration, the show is changed to a Christmas theme. This version features Owl and Moose singing Christmas carols as Moose convinces Owl that it can snow in the lobby. At the end of the show it snows as the show comes to it's close. The Christmas version contains the following songs: The Twelve Days of Christmas, Frosty the Snowman, and Let it Snow.

The soundtrack for this show was produced by Bluetube. Each song can be found on Soundcloud here:

This particular version was found at the Wisconsin Dells, WI location.

Newer Version of the show

The show at Williamsburg VA after partial removal
Community content is available under CC-BY-SA unless otherwise noted.
Advertisement