ShadowQuest is an interactive role playing game similar to the original MagiQuest that was implemented into several Great Wolf Lodge locations in 2013. In this game, players investigate the reason why the light is disappearing in the sky and to defeat the mastermind behind it before it vanishes. The game was the first in the series to use the Unity engine for it's graphics. This game is also known as MagiQuest Chronicles: Journey To Save The Light. 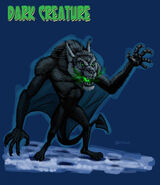