Female
Sammy the Squirrel is a young Squirrel that always carries a yellow camera with her. She is the representative for Great Wolf Lodge's Shutterfly Service, and owns her own photography studio called "Paw Prints". Sammy is also the titular mascot of Sammy's Flip Flop Workshop. Her birthday is on July 6th.

Sammy is a brown squirrel with a tan belly and blue eyes. She wears white and red sneakers, and formerly carried a yellow camera with her. As of her most recent walkaround, Sammy has been depicted as wearing a yellow overall dress with her name on the front, as well as several paint splotches.

In The Great Wolf Pack, Sammy is a creative extrovert, an artistic soul that draws inspiration from every source imaginable. Her creativity is unmatched, but she often struggles bringing her visions to life and leverages the strength of the pack to help bring those visions to fruition. She is energetic and optimistic, and her big vivacious personality far exceeds her small stature 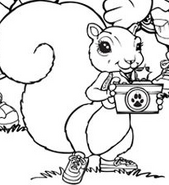 Older, more realistic depiction of Sammy from a coloring sheet, 2010

Artwork of Sammy at Gurnee, IL 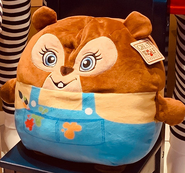