Male
Oliver Raccoon is a young Raccoon and older brother to Rachel the Raccoon. He has two attractions named after him, those being Oliver's Mining Co. and Oliver's Time Challenge. His birthday is on August 22nd.

Oliver is very knowledgeable in science and technology and is always full of information. He enjoys playing with computers and gadgets, including creating some of his own. Oliver is the one with the resources in hand to save the day.

In The Great Wolf Pack, Oliver is a math and engineering whiz with an encyclopedia of facts at his fingertips and the know-how to build the most complex contraptions. A bit socially awkward and an introvert, Oliver is also extremely curious; a trait that sometimes gets him into trouble. 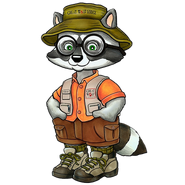 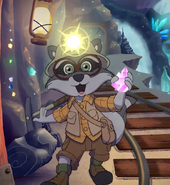 Board game piece of Oliver from a Nickelodeon print-out

Oliver holding his standard wand with a Power of Laughter Topper on it.

Oliver as he appears in Clubhouse Crew 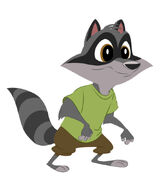