MagiQuest Chronicles: Rise of the Totem Masters is a game that can be found in newer lodges. You pick a Totem of your choice at the MagiQuest Marketplace. Totems can be used to duel other creatures in Battle Stations. They are enhanced in battle with Relics, which can be gained in Quests in the game. Wand Toppers can also enhance Totems.

In the near future, the Shadow Lords have returned to Vellara, spreading darkness across the lands, spawning monstrosities that terrorize villagers in the night. A young Magi will be sent forward in time and given a mystic figurine that can summon fourth a Totem Spirit Animal. Though many adventures the Totem becomes a powerful ally as the hero discovers what really happened to the Magi, and what ancient evil is behind the impending darkness.

For someone planning a trip to Great Wolf Lodge, this can be a great game to play with the family. As a light filler activity, the items purchased (wands, toppers, and totems) can be used over and over for multiple trips, or you can dedicate multiple hours over several days to complete the full storyline.

First, choose a totem. Lickety Spit (dog) is free and comes with the wand. The other three can be purchased at the shop, are linked to your wand, and the physical totem is required to use that character during fights. Beraxus (bear) focuses on high health and physical attacks, Mongowl (owl) focuses on strong and accurate attacks, and Wendingo (dingo) focuses on toughness and magical attacks. But realistically, there aren't significant tactical advantages, so pick the one you like best.

Leveling up: As you play the game (complete quests and fight battles) to raise your totem's level, you can choose which stats to improve based on how you like to play. There is a large boost at level 10, and the max is level 20.

Game Play: It is a combination of scavenger hunts throughout the Lodge (so great exercise) and battles at specific stations that are like complicated rock/paper/scissor battles.

The scavenger hunts can also be a fun time to meet people playing the same game, and provide hints for things you found that someone else is still looking for. They are almost all the same scavenger hunt "items" used in the other MagiQuest games. Each quest involves 1) getting the quest, 2) finding 4-5 items on walls (or ceilings) and "activating" them with your wand, 3) returning for your prize (a relic). There are 4 quest givers (for the 4 types of relics). You can also "activate" all sorts of other items to get gold coins.

The battles are where your totem's abilities come into play, and the game introduces you to it slowly. In addition to the usual rock/paper/scissors - Quick Attack (modified by Weapon relics), Power Attack (modified by Power relics), or Defend (modified by Shield relics) - there is a fourth category for Special Actions (granted by Arcane relics, modified by the Magic stat, and may have recharge times). In addition to "guessing right" since Quick beats Power, Power beats Defend, and Defend beats Quick, the combat results are also modified by the % chance to Dodge (Evasion and Accuracy), the % chance to Block, the % chance of a Critical Hit, and any additional modifiers from Special Actions. And then on top of that, your totem has an elemental affinity, the enemy has an elemental affinity, and your relics and topper have elemental affinities, which along with respective Strength and Toughness stats affect the amount of damage done from a hit.

As you move through the storyline, you will have 3 fights against the Shadowlord, based on your totem's level and getting progressively harder.

Toppers: These also provide stat boosts to your totem during the fights, but there isn't a significant tactical advantage, so pick the one you think looks best on your wand. (Most provide +1 in one stat and +2 in another, or +3 in one stat. (A one-point bonus in "Life" equates to +5.) The toppers also have an elemental affinity, which can help (again, only a tiny bit), if you are focusing on one type of element. Don't forget to "equip" the topper once you finish the first few quests and can use relics.

The "Great Wolf" topper costs more, but can mimic the functions of any other topper...but don't forget to have them activate them all in the shop (either when you purchase it, or later when they are less busy).

Relics: You can equip one of each type. There are 20 of each (although one Power relic is retired), ranging in power from Common -> Rare -> Epic -> Legendary. And they all have an elemental affinity. Other than the starting four items, the quests assigned are random, so if playing as a family expect to head in opposite directions a lot (or pair up for more fun). The epic items, as you would expect, have slightly harder quests and cost more gold coins to craft. The three legendary items (Charlock's Fang, Mirror Shield, and Tome of the Master Magi) require completing portions of the other MagiQuest game, but then are granted at level 10 by just talking to the applicable quest giver.

Elemental Affinities: Flame -> Frost -> Forest -> Stone -> Storm -> (back to Flame). It's hard to tell exactly, because the effects in battle are subtle, but it appears that each element is strong against 2 and weak against 2. This author is uncertain of the interactions between Totem, Topper, Enemy, and equipped Relic(s). You probably shouldn't equip all 4 relics of the same element, since the enemies are random. However, the Shadowlord is equally resistant to all types of damage.

In Summary: Time is the most important resource for completing the entire storyline, and Luck is the most important factor for the battles, so don't worry too much about strategy...optimize your totem if you want, learn the attack patterns of the enemies if you want, try to get the most gold for the daily or weekly leaderboard, or don't worry about it and just have fun. After all, this is made for everyone, adults all the way down to young kids! 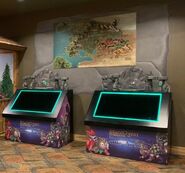