MagiQuest (Legacy) is the original game in the MagiQuest series that was released in 2005. It was first installed at the Great Wolf Lodge Pocono Mountains, PA location in 2006. This version of MagiQuest was a Forest Realm to fit the Northwoods theme of the resort. The Great Wolf Lodge locations had Quest Trees, the Great Wolf Topper, 2 exclusive quests, an adventure, and 2 characters which were created exclusively for the lodges and was added to all locations built from 2006 until 2014 when MagiQuest got rebooted into MagiQuest Chronicles: Guardians of the Realm Portals. 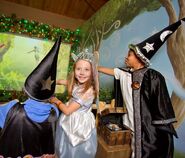 A Daughter and Parent doing the Silver Dragon Portal Adventure at the Niagara Falls, ON location in a commercial.