MagiQuest is a live action role-playing game in which players take the role of being a Magi, a wizard who does quests and searches for objects along the way. It is one of the lodge's signature attractions and is very popular with guests of all ages. It is similar in a way to World of Warcraft from Blizzard Entertainment, which of course is not directly affiliated with in any way to the actual game since they both share a similar model of styles and gameplay.

On September 7, 2015, the Myrtle Beach MagiQuest closed permanently. At one point, MagiQuest operated many standalone locations (referred to as "Kingdom Realms") outside of Great Wolf Lodge including two in Japan but all except one have since closed. The only remaining standalone location is in Pigeon Forge, Tennessee. The ones inside Great Wolf Lodge are referred to as "Forest Realms". But Lodges built since 2014 have dropped the Forest Realm for Lodges in favor for a new setting called Vellara in 2.0. A Similar Forest Realm Concept for Vellara would return in MagiQuest +.

Players first choose a special magic wand, top it with extra powers, and then are sent off on a quest. Each quest consists of various areas the player must visit in order to complete that quest. When visiting these areas, the player must point their wand to activate them. There are also kiosks scattered around the resort which act as specific areas during a quest. When you are done collecting all the items in the required order, you go to a status station screen that consists of an object or character that will grant you a rune. Collecting enough runes will allow the player to access an Adventure. Depending on the game, the object is to beat all the Quests and Adventures to become Master Magi, or beating the antagonist of that particular game.

A Drawbridge found on a MagiQuest castle in the Nickelodeon Great Wolf Interactive Page. 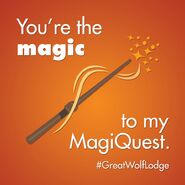