The Howlin' Tornado is a thrill water ride located inside the Bear Track Landing Waterpark of several Great Wolf Lodge locations. It features several tilting twists and turns which then drops the rider down into a six-story funnel where they ride up the walls high several times before going down the last tunnel into the pool. It is considered a favorite among many who go to Great Wolf Lodge.

This slide has been built by ProSlide Technology.

The names of the layouts are colloquial, until Great Wolf Lodge or ProSlide Technology reveals official names.

Resembles the "Rattler" layout found at many Six Flags chain parks, with some changes.

Named due to resembling Mondo Monsoon at Kings Island. 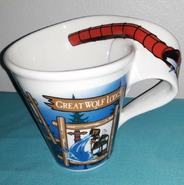