The Grand Lobby is an area in Great Wolf Lodge where different activities and such take place at. The Check In and Check Out process usually takes place here as well as the various shows the resort plays depending on the location. The Grand Lobby also consists of a seating area as well as a large fireplace with giant chandeliers lighting the entire area. It also serves as the center for the entire resort and is usually found on the 2nd Floor. The Grand Lobby is often considered to be a signature part of Great Wolf Lodge and is usually the first thing guests see whenever they walk into the resort to check in.

Examples of The Grand Lobby[]

Kansas City Grand Lobby As it looked in 2005 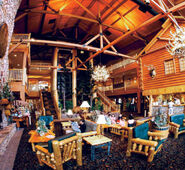 The lobby of Great Bear Lodge