gr8_space Tech Center was an attraction found at select Great Wolf Lodge locations in the late 2000s. It was a technology center designed with teens in mind.

The tech center had docking ports for MP3 players, computer stations where one could access the internet, and had TVs around the center as well. The center also provided video games including Nintendo Wii and Xbox 360. It also had an Evening DJ (known as a "Tech Jockey") as well as refreshments. The entry cost was $15 per person. Although the center was popular with teens during weekend nights, Great Wolf decided to remove the attraction in favor of newer attractions. 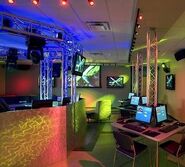