Cub Club, known originally as Cub Cabin, is an attraction found at several Great Wolf Lodge locations. It is a "kids club" area where kids come to play and do fun activities at. While some lodges continue to have Cub Club, most have been phased out in favor of Cub Club On Wheels or another similar attraction. Some also became standalone Great Wolf Kids Store locations as well.

In newer locations, there is a similar attraction called Camp H.O.W.L. Specs the Owl is represented here.

Kids are given the opportunity to do many kinds of crafts such as coloring pillowcases and t-shirts. They can also color in coloring sheets as well.

For younger children, Cub Club offers lots of toys for them to play with. There is usually a computer and a puppet theater to put on plays.

Kids can also take part in a "no-parents allowed" time which gives parents the chance to relax while their kids have fun doing activities. In the past, Cub Club also offered a Jr. Lifeguard program where kids got the opportunity to know what it was like to be a lifeguard. 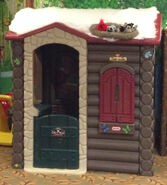 Inside Cub Club. Specs the Owl can be seen in this reading a book

Personal Attendant of Cub Club at the main desk 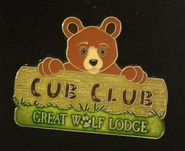