Biko the Bear, sometimes stylized as Bîko, is one of the former mascots of Great Wolf Lodge and a member of The Cub Buddies. He wears a yellow t shirt with a "B" on the front and his name on the back with blue shorts with orange spots.

Not much is known about him besides the fact he was friends with Wiley the Wolf and was often paired with him until Biko was retired in 2009. Biko has been confirmed to have appeared at Great Bear Lodge along with Wiley the Wolf. 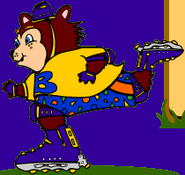 Art of Biko rollerskating from the Cub Club website, 2005 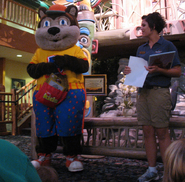 Biko Bear at an earlier version of Story Time in 2008. 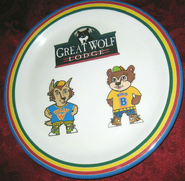 Wiley the Wolf and Biko appear on a special GWL plate. 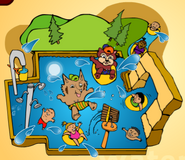 Pre-2009 Wiley and Biko playing in the Raccoon Lagoon.

Biko the Bear during Story Time in a Williamsburg, VA Promo.

Plush toys of Biko and Wiley the Wolf 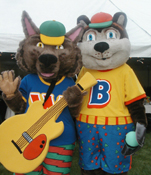